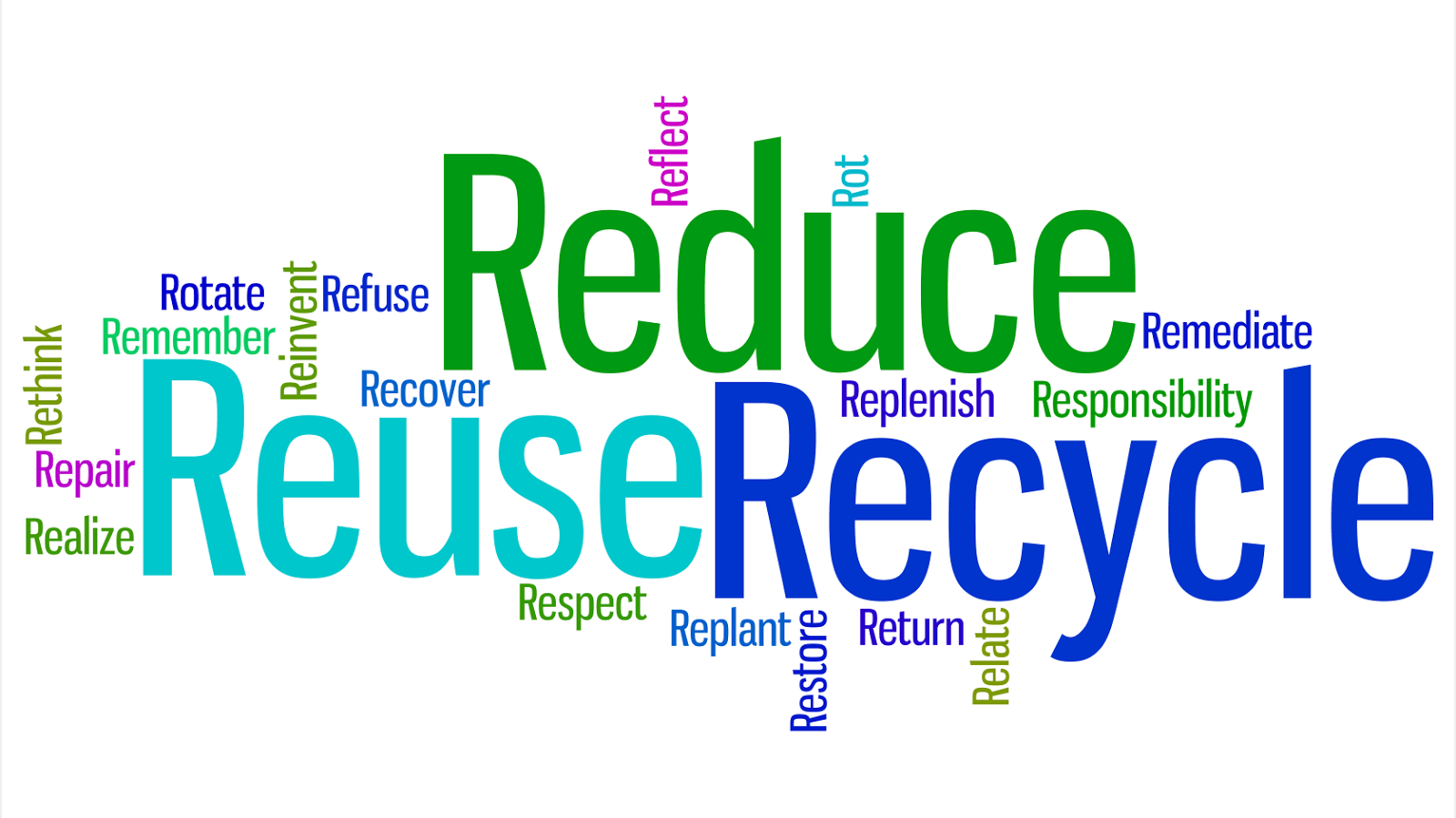 This week I heard an educator for sustainability from the United Arab Emirates talk via skype at the CELF summer institute about the 6R’s of sustainability, rather than the more familiar 3R’s (reduce, reuse, recycle).  Respect and refuse were two of the additional R's she listed, but I could not recall the 6th R.  I immediately googled 6R’s and found that rather than a standardized list of 6Rs, there are a whole slew of sustainability R’s offered on different web pages.  That got me thinking, how many sustainability R’s should we have?  Which are the most important?

Here are some of the contenders I found (starting with the big 3):

Reduce, Reuse, Recycle
The classic 3R’s of sustainability were on all of the lists I found.

Reduce
By reducing the amount of “stuff” we obtain, we decrease the energy needed for manufacture, transport and disposal.   We also cause less disruption to the ecosystems where the materials originate, are transported through and are disposed.  Life on a finite world, with finite resources, always involves limits.

Reuse
The more we can reuse items and avoid single use items, the better.  Take a look at my earlier post on the humble handkerchief vs. the throw-away tissue.

Recycle
There has been a huge shift across the country from throwing most waste into the trash, to recycling a large portion of it.  Single-stream recycling is changing the amount of recycling done by many households.  Check out yesterday's post on recycling.

Respect and Responsibility both ask us to think about the ecosystem, including the people who live around the world, and think about any effects our actions might have.

Refuse
To me, refuse fits within the category reduce.  By refusing items, we are essentially reducing our consumption.  This month of July, many in the sustainability community are encouraging others to refuse single-use disposable plastic items.  At ReduceFootprints blog this week’s #CTWW challenge is to refuse plastic bags.

Replenish, replant, restore, recover all seem to convey a similar theme: trying to leave the world as we found it for those who come after us.

Rethink/reinvent promote divergent/out-of-the-box thinking.  As is often attributed to Einstein, "We cannot solve our problems with the same thinking we used when we created them."  This is a critical part of sustainability and one that I think should definitely be highlighted.  By rethinking, we also make sure to view actions from different perspectives and consider how they will effect different constituencies of our planet.

Repair/renew might be lumped together with the replenish  group in terms of repairing the environment for future generations.  However, they can also be thought of as repairing or renewing an item so that it may be reused.

Rot – I found this on a list of R's  to represent composting, mulching and other parts of the cycle.  Growing up, my family collected kitchen scraps for our garden well before composting became remotely fashionable.

I think ultimately we should be thinking “cradle to cradle” for all items we use, in other words, consider the entire cycle so that there is no “waste” product at any point.  This will be the subject for a future post.
What would your sustainability R’s be?
Are there any R's that are not mentioned that you would include?

(This post was shared on Healthy, Happy, Green & Natural Party Hop.)
Posted by Lisa at 3:01 PM