Are free weekly newspapers a form of litter? 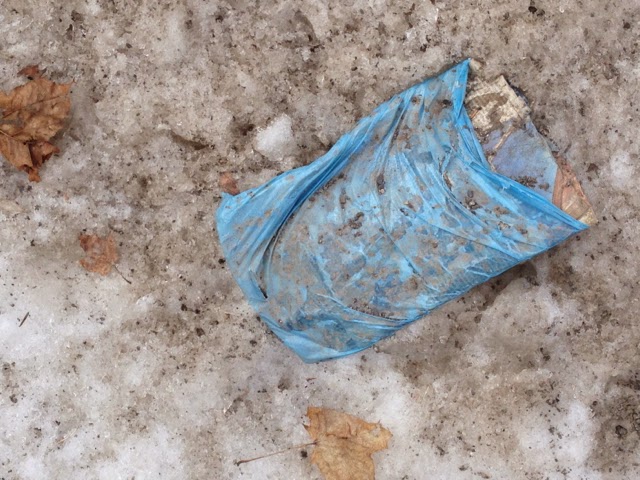 Each morning when I walk my dog, I see that more and more snow has melted.  While I love seeing the snowdrops popping up, I don't love seeing some of the other items that are emerging.

In a 20 minute walk, I spotted over 30 blue plastic bags filled with soggy, dirt-encrusted newspapers.   One house had over nine of these free newspapers, in various states of decay, on its property.  I ask you, why would anyone continue to deliver free weekly newspapers to a house that already has the previous eight weeks worth of newspapers covering its front lawn?

The newspapers are tossed out of a moving car window each week.  Some weeks the blue bags seem to be flung helter-skelter and end up on empty lots or midway between two houses.  During the winter, the freebies were often promptly covered by a snowfall before anyone noticed they had been delivered.
Usually I find them to be a nuisance - one more thing to pick up and add to the recycling container.  Upon occasion, I have found myself short of a dog poop bag, and the blue bags have come in handy.  I wonder if anyone reads these papers.  They are mostly a bunch of advertisements with only a single page of newspaper.

Several of these blue bags have found their way into the gutters that run along the side of the street, and I am concerned that they may clog up the storm drains.

Communities across the US have been faced with this same issue.  In many areas, newspapers are exempt from litter laws.

What do you think about having a plastic-wrapped newspaper that was not requested deposited on peoples' property?  Who is responsible for picking up the ones that end up in "unclaimed territory"?   Is it possible to opt out of these deliveries, so we can reduce rather than recycle?

Email ThisBlogThis!Share to TwitterShare to FacebookShare to Pinterest
Labels: reduce