This summer I am excited to have the chance to write several articles for the “grow it” column of Bedford 2020’s VegOut! newsletter.

The “grow it” column of VegOut! helps you grow your own food – you can’t get more local than growing your own.  Growing our own food not only eliminates any carbon emissions that would have been produced by schlepping food in from another part of the country, it also enables us to have easy access to fresh, nutritious food and connects us to the land and the cycles of nature.

The amazing thing is that when Bedford 2020 first came into existence, it was a time of ever-increasing carbon footprints, and the idea of formally committing to reduce the carbon footprint of a whole town by 20% was ambitious.  Now, a few years later, it has become common to hear of individuals, apartment buildings, companies, communities and localities all around the globe reducing their carbon footprints, so much so that carbon-emission reduction has almost become mainstream!  I find it incredible how quickly this shift has occurred, and how much we are changing in the ways we live sustainably.  The good news is that in just four years, Bedford 2020 is already 79% of the way towards its goal.  (79% of 20% = almost 16% reduction so far.)

For my first VegOut! article, I chose to continue my series of blog posts about gardening with deer, groundhogs, and other wildlife, by offering more tips about how to enjoy your garden’s harvests before the deer, groundhogs, rabbits, chipmunks and birds have a chance. 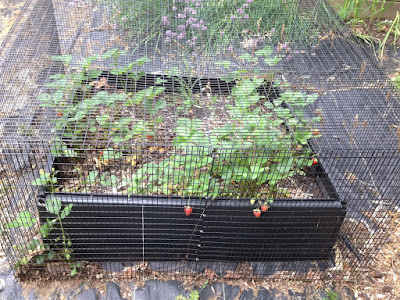 Has your community committed to reducing its carbon emissions?  Do you have any tips for gardening with deer, groundhogs and other wildlife?  Please share!

Gardening with deer, groundhogs and other critters; Part 2: Cage in the plants to keep the pests out!

A few years ago, I'd had enough with trying to use flimsy netting and popups to keep pests from eating my strawberries.  The pest-protection set-ups I tried usually failed to protect the berries, or if they did work, did not last more than one season.

So, I decided to instead look for cages meant to keep rodents in!  I figured anything strong enough to keep pet rodents from escaping would certainly be strong enough to keep critters (such as chipmunks, squirrels, birds, rabbits, groundhogs and deer) from eating my strawberries before I did.

My search led me to rat playpens.  I found they were wonderful at keeping deer, groundhogs, rabbits and even birds, chipmunks and squirrels out!  The playpens provided protection against fruit-eating birds but allowed insect pollinators to come and go. The photo below shows a raised bed of strawberries protected by a rat playpen.


Several years later, the strawberry beds in rat playpens are still going strong.  The playpens remain pest-proof and sturdy, and not a single strawberry got away!

As an added bonus, the hinged roof on the playpen makes harvesting a cinch!

Last August, my family decided to set up some more raised beds surrounded with playpens.

For complete pest-proofing, place a piece of hardwire cloth underneath the raised bed.  We skipped over this step and placed  empty 3' x 3' raised beds right on top of the lawn.  We did not weed or remove the grass; we just surrounded the empty raised bed with black weed-block fabric to eliminate the adjacent grass. 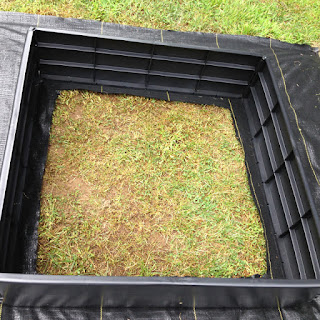 Then we placed corrugated cardboard on top of the grass inside the raised beds.  The cardboard will serve as a weed/grass block for now, and over time will decompose and become part of the soil. 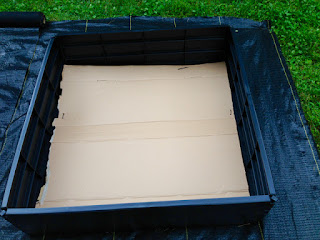 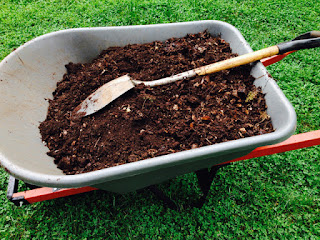 We surrounded the raised beds with 42” x 42” playpens. (We used the large size rat playpen from Martin’s cages). 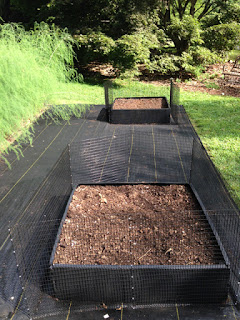 Playpen-enclosed raised beds are ideal for low-growing edibles.  We planted a mixture of lettuce, kale, beets and chard in this August planting for a fall harvest.

We have found these playpens perfect for growing strawberries, lettuce, kale, chard, beets and spinach and keeping them safe from nibblers of all sorts.  We are even considering growing lowbush blueberries in one in the future!

Depending on whether your garden is on the edge of the woods or in the center of a city, it will be plagued to varying degrees by wildlife.  For some gardeners, it’s just a matter of deterring fruit-eating birds and bulb-digging squirrels.  Other gardeners must contend with regular visits from deer, groundhogs (aka woodchucks) and rabbits too.
In my case, a deer trail runs on top of a steep hill behind my house.

My first few years gardening here were met with mixed success.  Not used to living in deer-country, I was dismayed to find the tomatoes I planted were eaten just as the fruit ripened.  Over the years, my family tried various strategies such as surrounding our garden with snow fencing, which proved cumbersome and not terribly effective.

One year I successfully grew a few butternut squash plants deeply intermixed with plants that deer normally do not eat.  Unlike planting a mass of edibles all together in a garden plot (which seem to shout to the deer “We’re here!  We’re here!  We’re here!”), edibles that are scattered individually often remain below the radar of deer.  Perhaps the critters did not find it worth their while to invest the energy to come and eat them.

Every year at the end of June, apples from an old tree drop onto the corner of our property, and without fail the apples become a deer magnet.  In the evenings, we see deer munching on the fallen apples. Once the deer have made the detour to forage under the apple tree, they check out what else is edible around our house.  Daylilies and other plants that were thriving in early June are eaten in one fell swoop at the end of June.

Garden in nooks and crannies:  Make use of microenvironments that are inaccessible to deer and groundhogs.
When my daughter was eleven, she wanted to plant tulips- red ones, and lots of them.  Unfortunately, tulips are like candy to deer, and where we live, tulips don’t stand a chance.  However, thinking about deer, we realized that we did have a place that the deer would not venture.  We have a high rock wall, with a picket fence on top leaving just a few inches of soil between the edge of the rocks and the fence.  As a general rule, deer do not jump into confined spaces that are too small for the deer to take a running leap out.  Here was the perfect tulip nook.  We selected the tulips – Red Hunter Species Tulips, which are hardy as far as tulips go, and World’s Favorite Darwin Tulips, and we planted them on top of the wall that fall.  Our tulip nook worked – the deer left them alone, and they looked stunning next to the garden phlox that cascades over the wall.   Years later, the tulips still put on a show.


Garden near your house.
Many times (but not always) animals will not venture up onto a front porch.   A friend of mine, who often has deer in her backyard, is able to grow tomatoes in containers on her porch.  Growing deer-favorites in window boxes and hanging baskets are options too.

Have you found ways to outsmart the deer by taking advantage of thorny bushes, high walls, small spaces, and other conditions that make an area inaccessible to deer?   Have you ever planted at low densities and managed to sneak below the deer radar?  Please share your attempts in the comments below.

This post is the first in a series about gardening with deer and other wildlife and was shared on Green Thumb Thursdays.

Read the other posts in this series:
Gardening with deer, groundhogs and other critters; Part 2: Cage in the plants to keep the pests out!
Posted by Lisa at 12:53 PM 6 comments:

Around my neck of the woods, this is the time of year to be on the lookout for spring ephemerals –plants that take advantage of the sunlight coming through the open canopy in the early spring.  Spring ephemerals are woodland, perennial plants that flower and set seed now, before the trees above them have fully leafed out.  In summer, the forest floor will be in deep shade, and the spring ephemerals will be “gone” - with just their underground portions remaining in wait until the following year.


This week I spotted Dutchman's Breeches (Dicentra cucullaria) as I walked through the woods:

I also came across these spotted leaves that I suspect may be trout lily (Erythronium americanum).  I will keep watching them to see if they send up flowers: 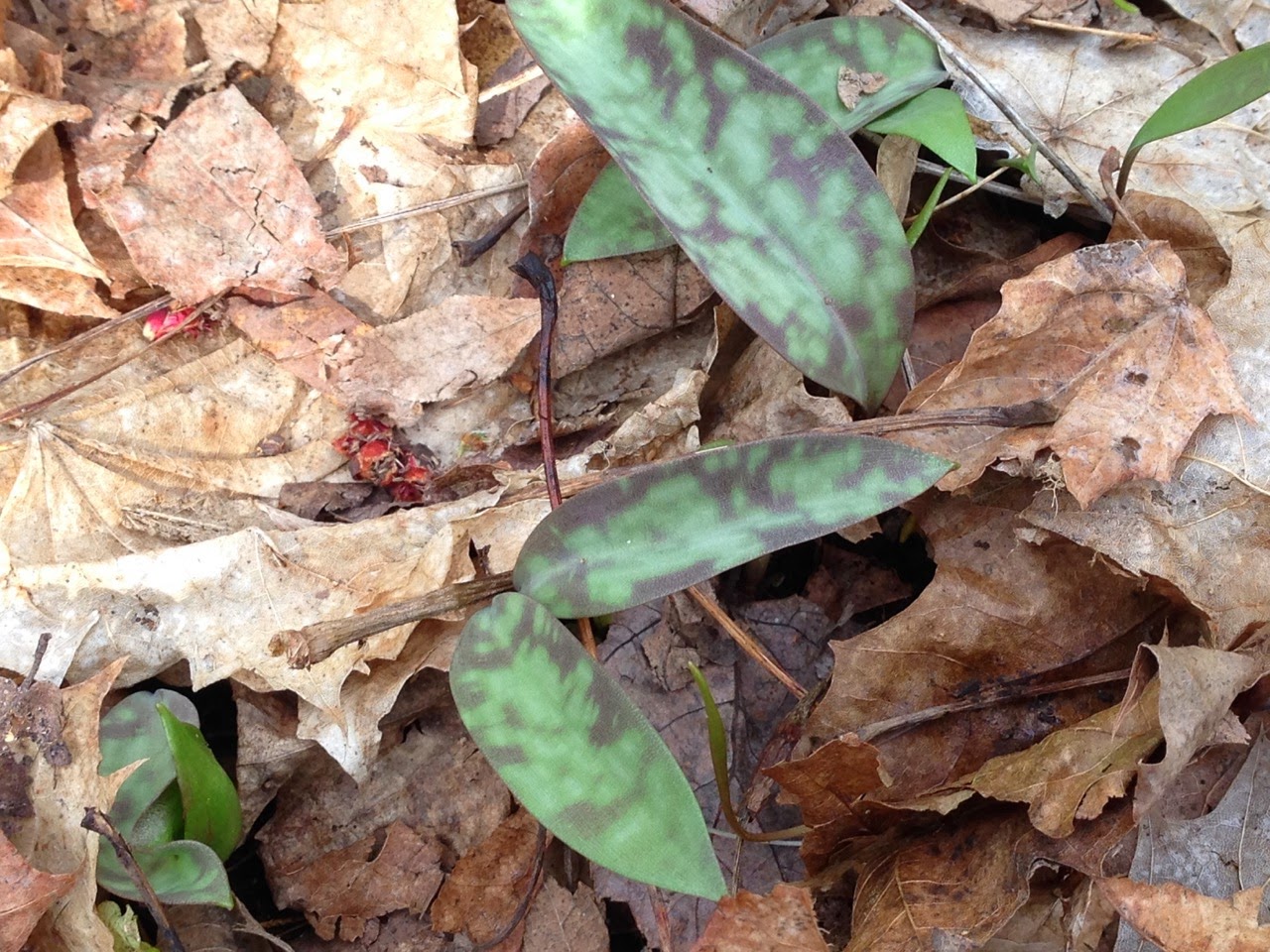 And, I suspect this might be Jack-in-the-pulpit (Arisaema triphyllum): 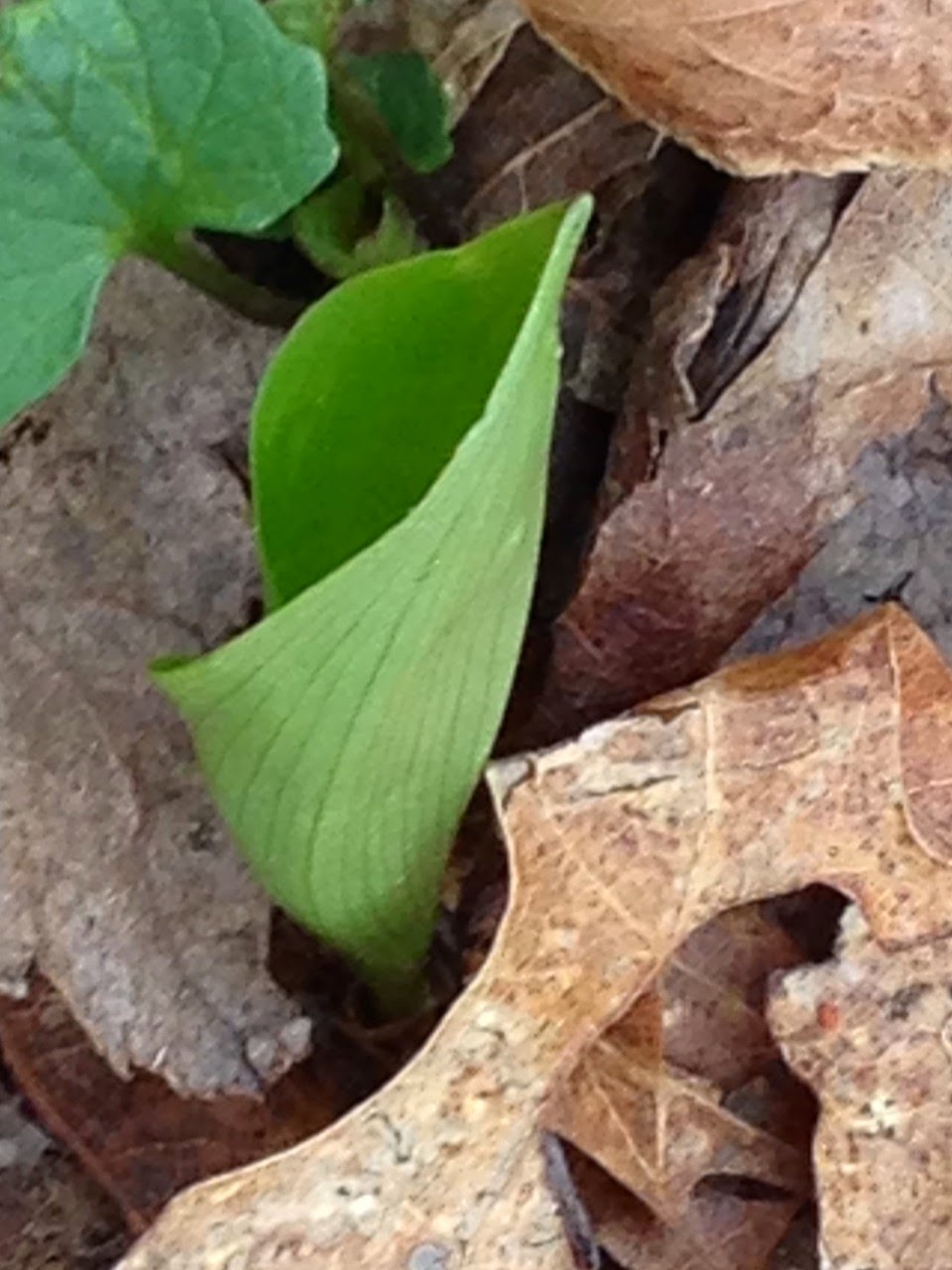 Spring ephemerals are fleeting.  Enjoy looking for them in the woods,  and let me know what you find.
Posted by Lisa at 1:49 PM No comments: 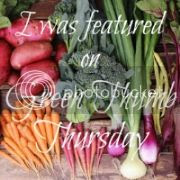